Between truth, fiction and conspiracy theories 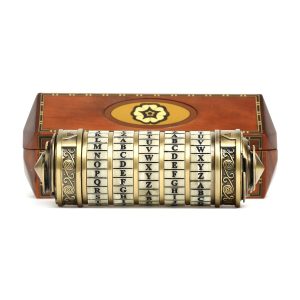 The Cryptex tells a slightly different story to the majority of the exhibits at the German Spy museum. The well-secured and entirely secret vault was in reality a figment in the imagination of the author Dan Brown. Writing in the novel The Da Vinci Code published in 2003, he came up with the idea of a vault containing a scroll, secured by a combination lock. Whilst the novel names Leonardo da Vinci as the inventor, the author was probably inspired by other sources. Dan Brown’s idea was realized in 2004 by the artisan Justin Kirk Nevins.

As in its predecessor novel Angels & Demons, the author takes his readers on a treasure hunt, following clues left in famous works of art. Whilst Angels & Demons concentrated on the work of Gian Lorenzo Bernini, The Da Vinci Code focuses on the Renaissance polymath of the same name. 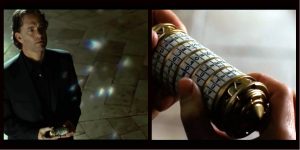 As the story goes, Mary Magdalena was “actually” the wife of Jesus of Nazareth, who bore him a child. As such, the Holy Grail was not a vessel, but Mary Magdalena herself. Secret societies such as the Prieuré de Sion and later the Knights Templar knew of this lineage and protected its descendants over the centuries. Himself moving in well-informed circles and thus aware of this secret, Leonardo left references to this secret in many of his works of art, in particular the painting “The Last Supper”. All this only comes to light following the discovery of a small mysterious device said to be invented by da Vinci. Access requires the investigators to enter the correct password; forcing the mechanism would only result in the destruction of its contents. In the film of the novel, this presents Tom Hanks, Audrey Tautou and Sir Ian McKellen with a number of serious challenges.

Leonardo da Vinci – the inventor of the Cryptex?

Dan Brown skilfully combines fiction, fact and conspiracy theories to tell an exciting story. The same applies to his description of Leonardo da Vinci. It is impossible to know whether the historical figure da Vinci was actually a member of a secret society. He is known as an engineer, and a number of television documentaries have constructed machines in accordance with his previously unrealized plans. As a highly talented draughtsman and designer, it is not inconceivable that da Vinci constructed devices to hide information, although the surviving plans predominantly depict machines of war. But then if not Leonardo, then who was it that had inspired Dan Brown? 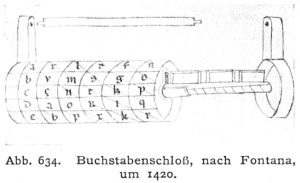 The functional principle of the Cryptex is reminiscent of a combination lock. Instead of letters the average bicycle lock or code padlock requires the entry of a numerical code. The idea for such a mechanism was developed long before the birth of Leonardo da Vinci in 1452. The Arab engineer al-Dschazari described the design of combination locks as early as the 12th century, and a manuscript from 1420 contains a number of drawings of a device resembling the Cryptex. At least this part of the Cryptex cannot be attributed to Leonardo da Vinci. There is also no evidence that he invented the self-destruct mechanism. Perhaps we should call Dan Brown the inventor of the Cryptex.

The principle of rotating discs inscribed with numbers or figures also serves the encryption of secret messages. Thomas Jefferson invented what became known as the “Jefferson Disc” in 1790 to encode and decode secret messages. This principle was also applied to the M-94 encryption cylinder used by the US military in the 1920s and attained fame at the start of the twentieth century with the German Enigma. Developed in 1915, the device used rotors and discs to scramble and unscramble messages and bears a striking resemblance to Cryptex and co.