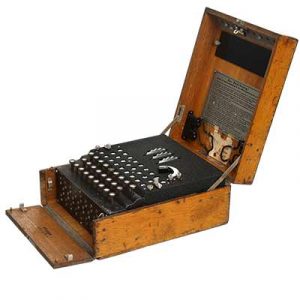 Enigma is perhaps the best-known encryption machine of the Second World War. Derived from the Ancient Greek word for “riddle” (and not “secret” as is often claimed) it served as the name for a range of different machine versions. Developed in 1918 by the German engineer Arthur Scherbius, the Enigma A was presented for public view in 1923. The world-wide fame of this rotor-based machine is due to the later versions used by the Nazis during World War Two. The German military used a variety of types, installing the “M4” in their U-boats, whilst military intelligence preferred the model “G”.

One of the most-used models – the Enigma I – can be viewed in the German Spy Museum. Weighing in at 12 kilograms and used by the German Army, this can be recognized by the markings on the rollers, which run from 1 to 26. The naval machine used the letters A-Z. A short set of instructions on the inside of the lid contains no secret information, but consists mainly of maintenance information. Rule number one: keep very clean with regular cleaning! This
ensured clean contacts and a good transmission.

The code was not cracked thanks to a transmission error, but through the hard work and good brains of top mathematicians, who analysed technical glitches and mistakes in operation. Marian Rejewski and Alan Turing number amongst the most famous of these many brilliant figures.