As with the famous German Enigma, the name “Fialka” (meaning violet) refers to a number of generations of a similar device. The original model, the M-125, was produced in the USSR from the mid-1950s. This was followed by the M-125-3 series in the late 1960s. Both versions were adapted for use by members of the Warsaw Pact. 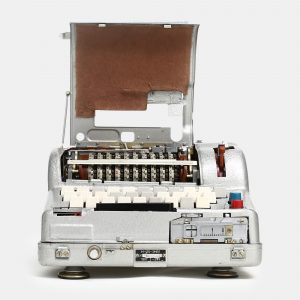 The Fialka on display in the German Spy Museum is a M-125-3 encryption machine from Poland – identifiable by its Polish-language keyboard. As rotor cipher machines, the Fialka and Enigma devices exhibit a number of technical similarities. As with a bicycle lock, they use numerical or alphabetically printed discs, the correct positioning of which determine the code.

In many senses however, the M-125 represents a further development of the Enigma. Originally designed to encrypt and decode messages written in Cyrillic, the Russian machines produced for the other countries of the Warsaw Pact were adapted to accommodate a range of different Latinate alphabets. This required changes to both the keyboard and the printheads. Cyrillic is written with 33 different characters, but the Fialka was limited to the 30 most common characters so as to minimize the mechanical complexity of the device. Each of the 30 characters on the keyboard activated one of the letters on the wheels. A lever enabled the operator to switch between the four functions accorded to each key on the keyboard and was instrumental in permitting the switch between the Cyrillic and Latinate alphabets. The message was no longer issued via a lamp array, but was printed or punched onto paper. A perforated tape reading device on the front right-hand side enabled the quick duplication of messages. 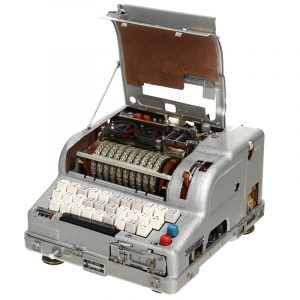 Successor models incorporated further features designed to increase the level of encryption safety. The increase from three or four discs to ten increased the number of possible combinations from the 17,576 produced by Enigma, to a breath-taking 590,490,000,000,000. The plug board of the Enigma model was also replaced by a card reader. One considerable advantage over Enigma was the ability to encrypt a letter with itself, previously an impossibility and one of the keys to cracking Enigma by Polish and British cryptanalysts.

Although the Fialka was employed by a number of Warsaw Pact states, it was not used to encrypt communication between these allied states. The easy operation and complex encryption of the device meant that it remained in service up to the end of the 1980s.