The miniature camera for the lady spy

Intelligence agencies are well-versed in hiding cameras in a range of clandestine locations. The location of hidden cameras should be adapted to the appearance of the agent, so as to allay all possible suspicion. An agent should only use a camera in a box of matches, if they are a smoker. Female KGB agents were issued with a camera installed in a regular lipstick. The German Spy Museum has an example from the 1980s, the ZVOUK lipstick camera.

Women everywhere used makeup during the Cold War and a Soviet agent of the fair sex would never raise suspicion when applying lipstick, whatever the context. Taking them to their jobs as secretaries in ministries or large companies, the agents could use the camera in plain sight. They simply placed the document on their desk in front of them and pretended to freshen up their makeup. Leaning their elbows on the desk, they twisted open the lipstick, which opened the lens cover at the base of the tube. 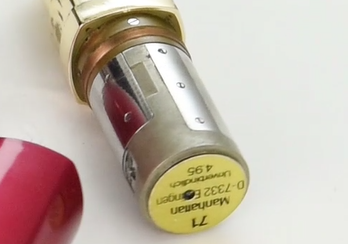 The camera shutter was so small – 1.5 mm in diameter – that no one would spot it unless they were looking very closely. The agent operated the camera by turning the lipstick further, thereby taking the photograph without making a sound. The camera held enough film for 30 photographs. Although easy to use, the camera required precise operation: the camera needed to be held 25 to 30 cm from the document. Agents ensured a well-focussed photograph by adopting the standard position of placing their elbows on the table and hold the camera perpendicular to the desk.

A KGB spy in the Office of the West German President

A similar model of this lipstick camera was issued to Margarete Höke, employed a secretary in the office of the West German President in the 1980s until her identity as a KGB agent was discovered in August 1985. Although instructed in it use, she only ever deployed it once. A colleague entered the room just as she had placed her elbows on the table and she felt observed.

During training, agents learn to change tactics if they feel unhappy with a certain method of spying, otherwise they will suffer stress and compromise themselves. Margarete Höke took the advice to heart. Part of her job involved copying important documents for internal distribution. She simply made an extra copy and took it home to pass on to her KGB handler.

Even if the ZVOUK lipstick camera was not everybody’s favourite, it demonstrates a remarkable level of creativity and technical ingenuity. How many such cameras the KGB made and where they were used remains unclear.