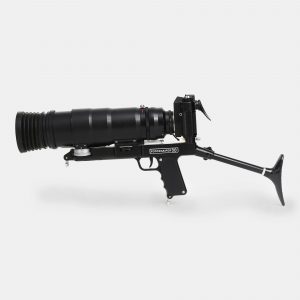 Spies nearly always need to take photographs, and sometimes from very difficult positions, either close up or from a distance. Seeking to enable agents to conduct long-distance surveillance operations, the Soviet company KMZ (Krasnogorsker Mechanikfabrik) developed an exceptional long-range camera: the Photo Snaiper. Based close to Moscow, the company manufactured equipment for both civilian and military optical devices. The Photo Snaiper from the 1980s is one of the unique artefacts on show at the German Spy Museum

Developed for observation tasks, the device was issued to KGB counter-intelligence, the Soviet border force and other intelligence agencies in the Warsaw Pact. Often employed for wildlife photography and at sports events, long-lens cameras were also well-suited for spying on sensitive and even moving objects – such as cars – from a long distance. The weight of such equipment however usually requires a tripod to steady the lens and prevent blurred images. As spies need to travel light, KMZ decided to design the equipment to resemble a rifle. The device is made of three basic components – a Zenit 12S single lens reflex camera, a Tair-3S 300 mm super tele-objective and a base structure resembling the trigger and shoulder butt of a sub-machine gun. The whole structure could be dismantled quickly and stored in a suitcase. A shoulder butt supported the heavy body of the camera and the operative focussed the lens with a dial at the front of the tube. Once the agent had assumed a steady position, he could “shoot” the picture using the hand trigger and then pack up and go. Just like a sniper.