Finding the truth on the graph

Treachery, a false identity or simple lies are part and parcel of the intelligence world. Seeking to separate the sheep from the goats, a number of countries make considerable use of polygraph tests, more commonly known as “lie detectors”, a method which is not universally accepted as being reliable. The German Spy Museum has a model of polygraph commonly used by various US intelligence and law enforcement agencies in the 1970s: the Lafayette model 76056 polygraph.

A mobile device in a suitcase

The Lafayette Instrument Company has been a leading manufacturer of polygraphs since the 1970s. This model 76056 polygraph is incorporated in a suitcase and thanks to its small dimensions (54x14x39cm) can be easily transported for use on-location. This device costed over $2,000 at the time of its sale. The polygraph measures blood pressure, pulse and breathing; the bodily reactions of a subject wired up to the machine are recorded on graph paper.

Although the “lie detector test” has established itself in popular consciousness, the Lafayette Instrument Company would never use this term, as the machines do not detect lies. They merely register a person’s bodily reactions during questioning. The information thus gathered can only be interpreted correctly by an investigator with the requisite psychological training, who compares the bodily reactions of the interviewed person with the answers given to control questions to see if they present any correlation or deviation. Advocates of this technique believe that the vegetative nervous system always registers the act of a lie, even if the liar offers no visible clues. 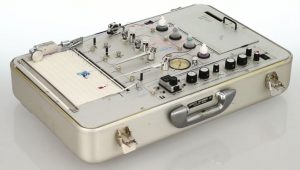 Critics of this interview technique say that interviewees can influence the outcome of a polygraph test by simulating agitation during the control questions. Intelligence operatives are trained clench their teeth or the muscles of the anus or simply to imagine a terrible situation in order to trigger a panicked reaction.

In the 1950s, the CIA sought to persuade the West German Foreign intelligence agency BND to use the polygraph, but to no avail. In the USA, both the intelligence and law-enforcement sector and a number of private companies make use of “lie detector tests”. The debate as to the reliability of the polygraph will probably never be resolved. Many investigators are convinced of their usefulness however, even if they are not scientifically reliable. A number of reports exist of suspects who once connected to the polygraph simply decided to tell the truth.