The surveillance of enemy communications has played an important role in military intelligence since time immemorial. The expansion in communications technologies during the course of the 19th century created even more opportunities to spy on the enemy, especially in war time. Mobile field telephones were deployed from the early 20th century to link forward units with command headquarters.

One of the first methods of surveillance of these new communications was developed by the Austro-Hungarian Empire during the First World War. The German Spy Museum Berlin is in possession of one of the last remaining examples of the Abhorchapparat BW Poppr field telephone listening device. 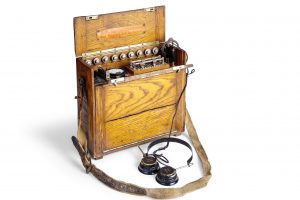 Designed by Lieutenant Josef Poppr of the Imperial Austro-Hungarian Army and named after its inventor, the Abhorchapparat BW Poppr functioned as an amplifier of the electrical signals. Field telephones were connected by ground cable; Poppr developed an amplifier which picked up and amplified the electrical signals which seeped into the soil from the telephone cables. 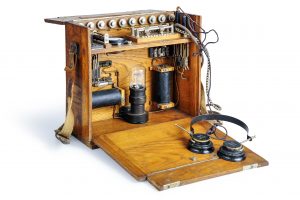 This unit was very manageable by contemporary standards; with dimensions of 32 x 28 x 12 cm and a weight of six kilograms, the oak box containing the equipment could be carried across the battlefield easily.

The operator of this surveillance equipment would insert up to ten long metal probes into the ground to pick up signals being transmitted, which were connected to terminals on the top of the box. Electron tubes in the box amplified the low-frequency electrical signals. An operator listened to the intercepted communications using headphones.

The control panel had a voltmeter to measure voltage and a search switch to switch between the ten probes so as to isolate the most important communications. The equipment had an effective range of up to three kilometres.